The New Ave historically has been an eclectic place for all different types of businesses, cultures, and people, and we like it that way. Over the last decade many planning efforts and projects have been dedicated to increasing business opportunities, community identity, and alternative transportation modes like transit, walking, and biking. Through plans, projects, grants, and events, we are committed to making the New Ave a better place for everyone. 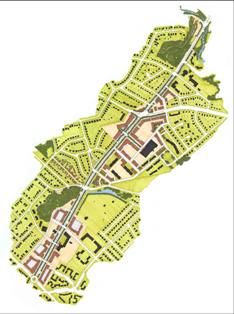 In August of 2007, the City of Takoma Park, in coordination with the Montgomery and Prince George's County Planning Departments, held a seven-day design charrette in the City Community Center to create a concept for the redevelopment of New Hampshire Avenue. The workshops covered the area from Sligo Creek Parkway south to Eastern Avenue.

Businesses, residents, agencies, and politicians from Takoma Park, Montgomery County, and Prince George's County were invited. Even legislators at the federal level were represented. Folks participated in workshops, meetings, and also an open studio to give their ideas, opinions, and concerns. The New Hampshire Avenue Corridor Concept Plan was presented to the City Council in November of 2008 and subsequently adopted.

Implementing the City's vision for New Hampshire Avenue is a multi-pronged approach that requires public investment from all levels of government, private investment from business operators and property owners, and ongoing community engagement. Since the plan was adopted in 2008, the following milestones have been reached in the four main areas of implementing the vision:

Codify Planning and Land Use Policies

Improving Streetscapes for All Users

2008 - New Ave Community Garden Grant was initiated by the City of Takoma Park, and provided funding for eight garden groups over six years.

2009 - Vision for Holton Lane was developed to guide future improvements along this small commercial street in the Crossroads. Subsequent streetscape improvements were installed including lighting, street strees, and stormwater management.

2018 - The New Ave Bikeways project design is funded for the second phase of design.

2008 - The New Ave branding effort and website launch to provide an identity and online presence for the hundreds of businesses on the New Hampshire Avenue corridor.

2015 - Recreational Needs Study and Concept Plans for the Takoma Park Recreation Center on New Hampshire Avenue are developed for the City of Takoma Park.

Investments in Transportation Infrastructure and Service